Central bank policy and market expectations in the US 2022

The US Federal Reserve has made clear announcements about monetary policy in 2022. What does the market expect from the Fed and what impact do the capital markets think this policy will have? An analysis of the market at the end of 2021. 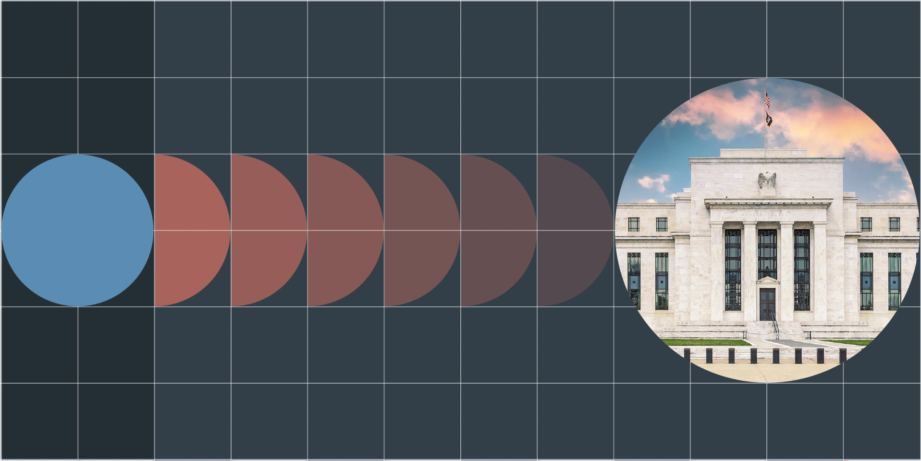 Tapering coming to an end, interest rate hikes in sight

The US Federal Reserve began to tighten significantly the loose monetary policy of recent years during the fourth quarter of 2021. First, the gradual reduction of bond purchases was heralded in the November meeting and the pace of tapering was doubled to USD 30 billion less purchases per month in December. As a result, the Fed’s bond-buying programme will end as early as March 2022.

On the other hand, the Fed has also announced much faster rate hikes. The following chart shows the median of the Federal Open Market Committee’s (FOMC) members’ estimates of where US key interest rates should be in the coming years. These so-called “dot plots” are considered an important communication tool of the Fed regarding future interest rate policy.

As the chart shows, there was a significant tightening of expected monetary policy between the September and December Fed meetings. Although there has not yet been a rate hike for 2021, expectations for 2022 were 0.875% in December, 0.625% percentage points higher than three months earlier. For 2023, key interest rates are expected at 1.625% after 1% in September. Even for 2024, the Fed now sees key rates 0.375 percentage points higher at 2.125%. The reason for this rapid tightening of monetary policy is seen as rising inflation, which peaked in mid-December 2021 at 6.8% for the time being.

A divergence between short and long maturities can also be seen in US Treasury yields. The two-year yield experienced a massive increase, rising from 0.28% at the end of September to 0.73% at the end of December, despite concerns about the fourth wave of Covid infections. Longer-term yields, on the other hand, were unimpressed. The ten-year yield moved sideways, ending the quarter two basis points higher at 1.51%, while the thirty-year US Treasury yield fell 14 basis points to 1.90%.

Thus, a clear flattening of the yield curves was seen over the quarter. The spread between ten-year and two-year yields fell by 43 basis points to 0.78%, and the spread between thirty-year and two-year yields fell by as much as 59 basis points to 1.17%. The market often associates such a sharp flattening with a significant decline in growth and thus inflation expectations. This market movement is an indication that the market views the Fed’s forecasts as too restrictive and thus inhibiting growth.

To put Fed and market expectations in a longer-term context, the following chart shows the history of key interest rates in the US since the early 1970s and the official recessions as determined by the National Bureau of Economic Research (NBER).

US interest rate cycles and recessions

According to current market expectations, this pattern is likely to continue in the upcoming interest rate cycle. A frequently heard interpretation of this development is that the growth potential of the US has weakened over time and the maximum interest rate level that the real economy can tolerate has fallen significantly. If this is the case, fears of excessive interest rate increases, especially for longer maturities, should be misplaced.

A second insight of the chart is that every Fed rate hike cycle since the 1970s has ended in a recession. These recession phases are only determined by the NBER retrospectively, so when the recession occurs it is not always apparent to market participants. For example, in April 2008 Fed President Ben Bernanke predicted before the US Parliament that the US economy would not slide into recession, while its onset was retroactively determined to be December 2007. From the figure it can be seen that the beginning of each recession occurred around the interest rate peak or shortly thereafter. Based on the market’s interest rate expectations, this would mean negative economic growth in the US probably in the course of 2024.

The Fed is optimistic in its forecasts that a rapid rise in key interest rates over the next two years will not have a noticeable impact on economic growth in the US. The market is much more sceptical, seeing a shorter cycle and no policy rates going beyond 2% over the next decade. Further economic development should ensure an adjustment of expectations on at least one side.  This ensures an exciting interest rate year in 2022.