Recession ahead – How are the central banks reacting?

How is inflation developing? Dr Harald Henke looks at the reactions of the central banks and the associated developments of key interest rates and inflation in the emerging recession with a view to the Eurozone and the USA. 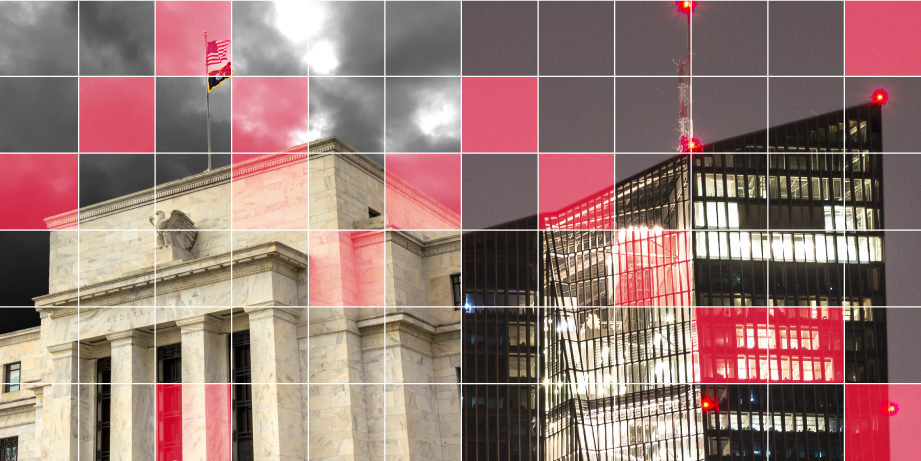 The second quarter of 2022 was marked by a further acceleration in inflation rates. Sanctions against Russia have further pushed up energy prices and caused prices to rise across the board. In both the USA and the eurozone, annual inflation is now above 8 %. Even supportive measures such as the temporary reduction of taxes in Germany have not brought about a turnaround in price development.

Figure 1: Inflation rates in the euro area and the USA

Accordingly, central banks worldwide continued to tighten their monetary policy in the second quarter. The Fed raised the key interest rate in two meetings from 0.5% to 1.75% and has begun reducing its balance sheet (“quantitative tightening”), while the ECB held out the prospect of interest rate hikes in the second half of the year. This was reflected in rising money market rates. The following chart shows the expectations for three-month interest rates for the USA and the eurozone in December 2022.

As can be seen from the chart, the expected key interest rate has increased further in both currency areas:

Although interest rate expectations for central banks have continued to rise over the quarter, two interest rate steps have been priced out again in recent weeks. The background to this is a significant decline in economic indicators. Many market participants expect a recession to begin this year or in 2023 at the latest.

Indeed, a number of economic indicators point to a significant downturn:

Figure 4: Real money supply growth in the US and the euro area

Figure 5: Consumer confidence from the University of Michigan

Figure 6: Atlanta Fed Nowcast of GDP growth in the US

The economic indicators point to an imminent recession, which – depending on which indicators are used – will be more or less severe. Therefore, the following questions arise in particular: How is inflation developing? How long will the central banks continue their restrictive monetary policy? When will interest rates fall again and when will quantitative tightening be replaced by a new round of quantitative easing (bond purchases by central banks)?

Market expectations in this regard are very clear, especially for the USA. The next chart shows the inflation expectations over the next five years for the USA and Germany.

Figure 7: Five-year break-even inflation for the USA and Germany

As can be seen from the chart, inflation expectations have been declining for some time. For both the USA and Germany, the expected average inflation rate over the next five years has fallen from a peak of around 3.5% in March to just over 2.5% most recently. While this value for Germany is still above the average of the past years, the value for the USA is now as low as it was in September last year.

Interest rate expectations show a clear divergence between the interest rate path in the USA and the eurozone. In North America, there have already been interest rate hikes, and further aggressive interest rate increases are considered a foregone conclusion by the market. In Europe, on the other hand, the first interest rate step has yet to be taken. Therefore, Europe is lagging behind the USA in terms of interest rate dynamics.

Figure 8: Implied money market interest rates for the USA and the eurozone

Systemic risks in the euro area

While the Fed has a growth mandate in addition to its inflation mandate, the ECB is – at least unofficially – committed to the cohesion of the eurozone and thus to its own raison d’être in addition to its inflation target. In this respect, a look at the spreads of government bonds from the periphery, i.e. the yield difference to German government bonds, is always also a barometer for ECB intervention in the market.

As can be seen in the chart, rising interest rates and credit spreads have been accompanied by an increase in the risk premia of periphery government bonds. While Spain’s spreads widened to 1.36% by mid-June, Italy’s spreads over German government bonds rose to 2.42%. Due to these dynamic increases, the ECB intervened and held out the prospect of more flexibility in the programmes. This included a deviation from the key to allocating bond purchases across countries. This has calmed peripheral spreads somewhat, but it remains to be seen whether the announced measures will be sufficient to prevent a further widening of spreads.

How will the central banks react?

Central banks around the world face an unenviable task. They are navigating an economic environment characterised by a sharp downturn with recession imminent, supply-driven inflation at its highest level in 40 years, and an unpredictable geopolitical environment that could hold further economic shocks in store.

How do central banks react if we get a recession with inflation accelerating further at the same time? How are the individual goals of growth and inflation weighted in relation to each other? And what systemic risks lie beneath the surface and become visible in a crisis scenario?

The market expects a significant economic downturn and an accompanying decline in inflation rates due to the collapse in demand to levels acceptable to central banks. Other analysts point to the high inventory levels, the reduction of which usually goes hand in hand with price cuts. Accordingly, the market expects the end of the cycle of interest rate hikes as early as the beginning of next year.

If the economic slump turns out to be significant, even new stimuli are realistic. Since in all likelihood the US parliament will fall into the hands of the Republicans in the November elections, it is unlikely that larger fiscal packages will be launched afterwards. The most likely scenario is therefore the next round of quantitative easing. The market is already beginning to anticipate this.

Article
Outlook: What comes after the money glut and stock market bubble?
The shift in the role of the central banks has led to a positive price development since the beginning of the millennium, despite several crises. The highly expansive monetary and fiscal policy, combined with the low general inflation rates until recently, has also led to increases in asset prices, some of which have been significant. Thomas Kieselstein, CIO, describes this development and the associated consequences for investors.

Article
How do we create multidimensional value for investors?
The investment challenges facing institutional investors are becoming ever greater. In this environment, it is crucial to have an asset manager at your side who offers significantly more than just managing the money. This is what really matters in the future.