How do government and corporate bonds perform in a stagflationary environment?

The 1970s hold fascinating insights for the current market environment. Dr Harald Henke looks back at historical bond markets in this period of stagflation and answers how a similar scenario might play out today. 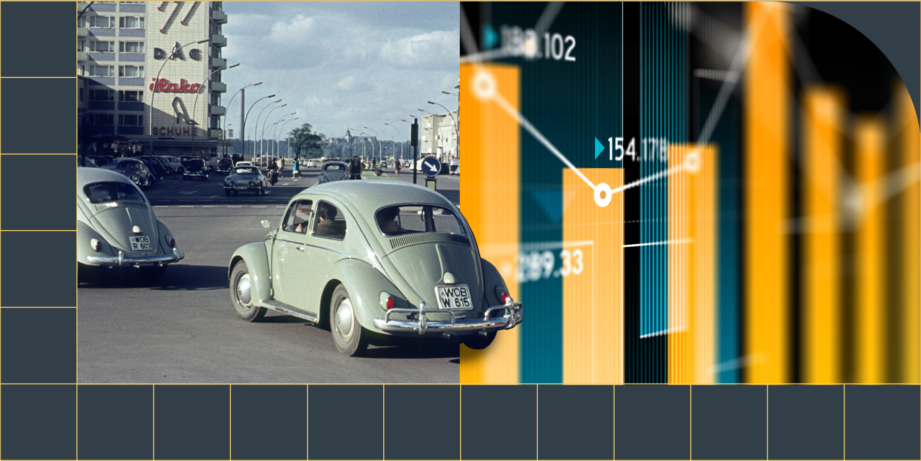 Heavy losses in fixed income in 2022

At the beginning of 2022, inflation rates across Europe and North America reached their highest levels in decades. In the United States, the inflation rate has exceeded the 8% mark, while in the eurozone it is only slightly below. Inflation expectations for the next few years also indicate inflation rates well above the targets set by central banks.

Accordingly, the pressure on central banks to counteract with interest rate hikes has increased. The US Federal Reserve and the Bank of England have raised key interest rates in three steps to 1% each, and further aggressive rate hikes can be expected in the near future. But the market now also expects several interest rate steps for the ECB in 2022.

This has led to massive interest rate increases in many currency zones across the entire maturity spectrum since the beginning of the year:

At the same time, disruptions in supply chains, geopolitical tensions and a weakening of the economy led to an increase in risk premia on the markets. This was also reflected in higher spreads for corporate bonds, which led to further negative performance contributions. Fixed income investors experienced significant price declines:

Inflation rates and interest rate dynamics of this magnitude last existed in the 1970s, a time that most financial market participants today only know from history books. The numbers at that time are shown in the next diagram, which represents US data due to the availability of data:

The chart shows inflation rates for the period Q3/1968 to Q3/1982, which is generally considered to be a period of high inflation, peaking at 14.8%. Between 1973 and 1981 the inflation rate was consistently above 5%. Accordingly, the period is also characterised by a continuous rise in interest rates, which brought short- and long-term interest rates to over 15%.

How did fixed income assets perform during this period? Are fixed income investments still interesting at all if similar interest rate dynamics will be seen over the coming years? Or are current yields high enough to compensate for the losses from potential further rises in interest rates?

Interest rate returns in the 1970s

To answer this question, we will look at the returns that investors were able to earn from interest rate positions in the period 1968–1982.

Credit spreads are another component of return generation. Although there were no reliable credit indices at the time, there are generic time series of credit spreads that go back beyond the 1960s. The following diagram shows the development of generic IG credit spreads for Baa-rated corporate bonds with ten years to maturity in USD.

In contrast to interest rates, IG credit spreads tended to move sideways, albeit with some volatility and a slight upward trend. This resulted in an additional return of 0.3% per year from holding ten-year corporate bonds. In addition, the monthly returns of ten-year government bonds and IG credit spreads were negatively correlated by –23% over the period, which had a stabilising effect on the performance of corporate bonds. The spread return over the years 1975–1978 averaged 6.5% per year, while interest rate returns in these four years were below the average of the high inflation period.

This is all the more surprising as one would expect that in a stagflation scenario like in the 1970s with low growth rates, corporate bankruptcies should have tended to increase. Although bankruptcies are rare in the investment grade, recessions and crises are often associated with significantly higher default rates in the high yield segment. The following diagram shows defaults for IG and HY bonds as a percentage of the total universe since 1955.

As can be seen, default rates in IG were low throughout the period including the 1970s. In the HY universe, there was one year, 1970, when the default rate exceeded 8%, but all subsequent years in the 1970s saw default rates below 2%, values that have been consistently exceeded since. For the period 1968–1982, the average default rate in the HY universe was 1.8%, while for the entire period 1958–2022, it was 3%. Corporate bankruptcies were therefore even significantly below average during the high inflation period.

Obviously, many companies in the 1970s had the opportunity to systematically pass on their rising costs due to the inflationary environment to their customers and remain solvent, which led to such low default rates. This also explains the comparatively moderate spread levels during the high inflation phase.

What returns would fixed income strategies have brought back then?

As can be seen, the returns achieved for USD IG credit strategies were positive over the entire period, with an average of 4.7% for the ten-year credit strategy and 6.2% for a strategy with reduced spread and interest rate duration. Both strategies were positive over both halves of the period but showed slightly higher returns overall in the second half of the 1970s.

The better performance of the short duration strategy is not surprising, as the lower duration has a performance-enhancing effect when interest rates rise. Somewhat surprisingly, the clearly positive returns of both strategies appear despite significant increases in interest rates. This is due to the increasingly higher interest rate level over time, which has ensured an increasing base return that has not been overcompensated by the price losses caused by rising interest rates.

Moreover, it should be noted that both strategies did not manage to achieve a positive real return, neither for the entire period nor for the two halves. The short duration strategy, however, fell just short of real capital preservation with a real return of approximately –1%.

How would a similar scenario play out today?

Currently (as of 10 May 2022), the yields for a ten-year USD IG credit strategy and a short duration counterpart are 4.5% and 4% before hedge costs. In the first five years of the high inflation period defined above, inflation rose by a total of 1.8 percentage points, while interest rates at the short end rose by 1.7 percentage points and at the long end by 1.3 percentage points. Assuming an identical absolute interest rate movement and constant credit spreads, the achieved annual returns of the credit strategies would be as follows:

As can be seen, such a gradual increase in interest rates with constant spreads is associated with distinctly positive nominal returns due to the increased carry of the strategies. A flat yield curve scenario with similar carry for longer and shorter durations would favour shorter duration strategies. The returns achieved are significantly higher than the negative returns of the current year, which saw massive and very rapid increases in interest rates from a significantly lower yield level. Therefore, a scenario like in the 1970s from the current interest rate level is not associated with negative nominal returns.

The 1970s environment was unfavourable for interest rate duration, but not for spread duration. Therefore, the question is how a short-duration high-yield product performed in such an environment and how it would perform in a future stagflation scenario.

“In a stagflation scenario like the 1970s, there is a strong case for including high-yield in asset allocation.”

The high-yield market in the US was not as developed in the 1970s as it is today, so reliable spread data is difficult to obtain. For this reason, we have historically simulated high-yield bond spreads with a fixed factor of 3 to the IG index spread as a historical approximation. We assume a 2% default rate with 40% recovery in line with historical figures from the 1970s. From this simulation, the following results emerge historically and looking forward:

Should a potential stagflation scenario materialise as it did in the 1970s with low default rates and stable spreads, the case can be made for including the high-yield segment in an asset allocation as higher-yielding protection against inflation.

What is left for a euro investor after hedge costs?

All figures above are USD returns without currency hedges. For the euro investor in fixed-income products, it makes sense to hedge the currency because the volatility of the currency is usually significantly higher than that of the bonds and thus sustainably determines the performance.

Currently, the one-year hedge costs are around 2.5%, which reduce the total return by a similar amount. These are made up of the interest rate differential between the US and Europe and the cross-currency basis, a premium that reflects the scarcity of dollars in the market and often rises in times of crisis.

Do fixed income instruments make sense in a stagflation scenario or should investors part ways with their holdings? In the 1970s, the nominal performance of IG credit strategies was positive, as the rising interest rates and thus negative interest rate change returns were overcompensated by the high carry amid sharp interest rate increases. Spreads were stable and default rates low. Assuming that a scenario similar to the one back then materialises, the case can be made for a reduction in interest rate duration, but not in spread risks. Short duration strategies in IG and HY would be suitable for such an environment.

However, those who assume a recovery of inflation rates towards the target level of the central banks should be cautious with a short duration approach. If this was the better strategy over the 14 years and three months of the high-inflation period, the performance figures over the subsequent 14 years and three months looked different: short duration IG yielded 8.8% per year, while the average return of the long-duration IG strategy was 15.1%, as declining interest rates favoured the higher duration strategy. An optimal fixed income strategy thus depends very much on expectations regarding the future market environment.

Article
Diversifying credit portfolios with factor investing
How can investors profit from investing in fixed income factor strategies? How does multi-factor credit differ in its characteristics from the fundamentally managed credit funds? Quoniam’s empirical study demonstrates that investors can diversify their overall credit exposure by adding a multi-factor strategy to their fundamentally managed credit allocation.